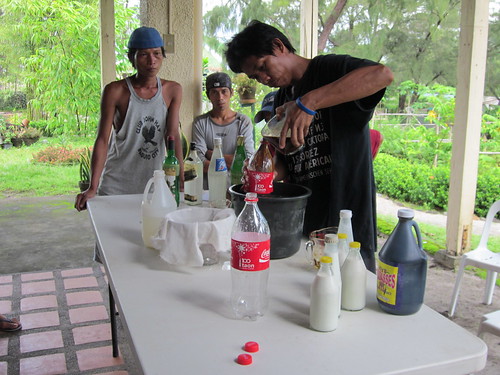 Inner Light Solution™ an extremely powerful anti-oxidant, probiotic drink beverage. This consortium of Syntropic Antioxidant Microbes can support your own body’s ability to create superb structure and function by both neutralizing the broad array of pathogenic, oxidizing chemicals we have accumulated (toxic load or body burdon), and by improving digestion and absorption of nutrients in your diet. One species of these microorganisms is Photosyntropic meaning it gets some of its food from the sun. This species emits an extremely powerful healing and detoxing frequency called Infra Red Radiation.

This frequency works on the level of quantum physics and quantum biology to restructure the water inside the body. By restructuring the water inside the body, inside the cells and tissues, a new level of order is established toward harmoney and coherence, repairing the damage of oxidizing chemicals and previous exposure to EMFs. This frequency also creates an environment which is discouraging to oxidizing, pathogenic, bacteria, yeast and fungi.

It does this by emitting a supersonic frequency unconducive to those species, as well as by eliminating the pollutants that are creating the environment which attracted them in the first place. Many will experience die-off symptoms when first using Inner Light Solution™ Ingredients: filtered and structured water, Effective Microorganism® (EM® Microbial Innoculant), molasses, green papaya, Celtic Seat Salt, Bentonite Clay, Kelp Seaweed Powder, Ginger Root, Tumeric Root, Orange Peel.

Recommended dosage for first month is: three teaspoons per day mixed in structured water with salt according to tast. One teaspoon per quart of water.

A little background on EM Technology™ as discovered by Dr. Tiro Higa

The uniqueness of microorganisms and their often unpredictable nature and biosynthetic capabilities, given a specific set of environmental and cultural conditions, has made them likely candidates for solving particularly difficult problems in the life sciences and other fields as well. The various ways in which microorganisms have been used over the past 50 years to advance medical technology, human and animal health, food processing, food safety and quality, genetic engineering, environmental protection, agricultural biotechnology, and more effective treatment of agricultural and municipal wastes provide a most impressive record of achievement. Many of these technological advances would not have been possible using straightforward chemical and physical engineering methods, or if they were, they would not have been practically or economically feasible. Nevertheless, while microbial technologies have been applied to various agricultural and environmental problems with considerable success in recent years, they have not been widely accepted by the scientific community because it is often difficult to consistently reproduce their beneficial effects. Microorganisms are effective only when they are presented with suitable and optimum conditions for metabolizing their substrates Including available water, oxygen (depending on whether the microorganisms are obligate aerobes or facultative anaerobes), pH and temperature of their environment. Meanwhile, the various types of microbial cultures and inoculants available in the market today have rapidly increased because of these new technologies. Significant achievements are being made in systems where technical guidance is coordinated with the marketing of microbial products. Since microorganisms are useful in eliminating problems associated with the use of chemical fertilizers and pesticides, they are now widely applied in nature farming and organic agriculture (Higa, 1991; Parr et al 1994). Environmental pollution, caused by excessive soil erosion and the associated transport of sediment, chemical fertilizers and pesticides to surface and groundwater, and improper treatment of human and animal wastes has caused serious environmental and social problems throughout the world. Often engineers have attempted to solve these problems using established chemical and physical methods. However, they have usually found that such problems cannot be solved without using microbial methods and technologies in coordination with agricultural production (Reganold et al., 1990; Parr and Hornick, l992a). For many years, soil microbiologists and microbial ecologists have tended to differentiate soil microorganisms as beneficial or harmful according to their functions and how they affect soil quality, plant growth and yield, and plant health. As shown in Table 1, beneficial microorganisms are those that can fix atmospheric nitrogen, decompose organic wastes and residues, detoxify pesticides, suppress plant diseases and soil-borne pathogens, enhance nutrient cycling, and produce bioactive compounds such as vitamins, hormones and enzymes that stimulate plant growth. Harmful microorganisms are those that can induce plant diseases, stimulate soil-borne pathogens, immobilize nutrients, and produce toxic and putrescent substances that adversely affect plant growth and health. A more specific classification of beneficial microorganisms has been suggested by Higa (1991; 1994; 1995) which he refer to as “Effective Microorganisms” or EM. This report presents some new perspectives on the role and application of beneficial microorganism, including EM, as microbial inoculants for shifting the soil microbiological equilibrium in ways that can improve soil quality, enhance crop production and protection, conserve natural resources, and ultimately create a more sustainable agriculture and environment The report also discusses strategies on how beneficial microorganisms, including EM. can be more effective after inoculation into soils.   THE CONCEPT OF EFTECTIVE MICROORGANISMS: THEIR ROLE AND APPLICATION

A bit of background on EM® Technology discovered by Dr. Tiro Higa, used in a wide array of applications such as: soil management, human health, building technology, bio-remediation of waters and lands.   The concept of effective microorganisms (EM) was developed by Professor Teruo Higa, University of the Ryukyus, Okinawa, Japan (Higa, 1991; Higa and Wididana, 1991a). EM consists of mixed cultures of beneficial an naturally-occurring microorganisms that can be applied as inoculants to increase the microbial diversity of soils and plant. Research has shown that the inoculation of EM cultures to the soil/plant ecosystem can improve soil quality, soil health, and the growth, yield, and quality of crops. EM contains selected species of microorganisms including predominant populations of lactic acid bacteria and yeasts and smaller numbers of photosynthetic bacteria, actinomycetes and other types of organisms. All of these are mutually compatible with one another and can coexist in liquid culture. EM is not a substitute for other management practices. It is, however, an added dimension for optimizing our best soil and crop management practices such as crop rotations, use of organic amendments, conservation tillage, crop residue recycling, and biocontrol of pests. If used properly, EM can significantly enhance the beneficial effects of these practices (Higa and Wididana, 1991b). click here for full article Throughout the discussion which follows, we will use the term “beneficial microorganisms” In a general way to designate a large group of often unknown or ill-defined microorganisms that interact favorably in soils and with plants to render beneficial effects which are sometimes difficult to predict. We use the term “effective microorganisms” or EM to denote specific mixed cultures of known, beneficial microorganisms that are being used effectively as microbial inoculants.

Rewild Your Way To Wellness

Sign up for our mailing list so you can receive delicious paleo superfood recipes, connect to Earth, and bio-hack your environment with powerful tools and techniques based on Ancestral Health.

Thank you for subscribing to Paleo All The Way